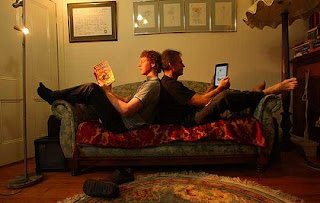 Imagem: The Sidney Mornig Herald
E-books are set to revolutionise the way we read. But plot twists may save paper books from going the way of the dinosaur.
FOR 15 years, pundits have declared the old-fashioned book to be as doomed as the orang-utan. Just as we will one day have to visit the last of that sad species in a zoo, the dog-eared paperback is destined for a similar freakshow status. Perhaps along the lines of collectable Wedgwood or silver spoons.
It isn't only the smug futurists who hold this view: some of Melbourne's most devoted bibliophiles told The Sunday Age the book is destined to be little more than an ornament as technology increasingly transports Charles Dickens and Dan Brown into the digital age.
If this is true, the local death throes of tree-sourced literature began in May, very quietly, when the Borders website posted the first e-book bestseller list for Australia. For the first couple of weeks, a No. 1 hit meant 20 copies sold. Four months later, Borders Australia and its sister company, Angus & Robertson, have sold more then 100,000 e-books and 20,000 Kobo e-readers, and seen 200,000 e-book applications downloaded free (for iPhone and desktop computer reading) from their websites.
Ler mais >>
Tweetar
Esta página utiliza cookies. Consulte a nossa Política de cookies.